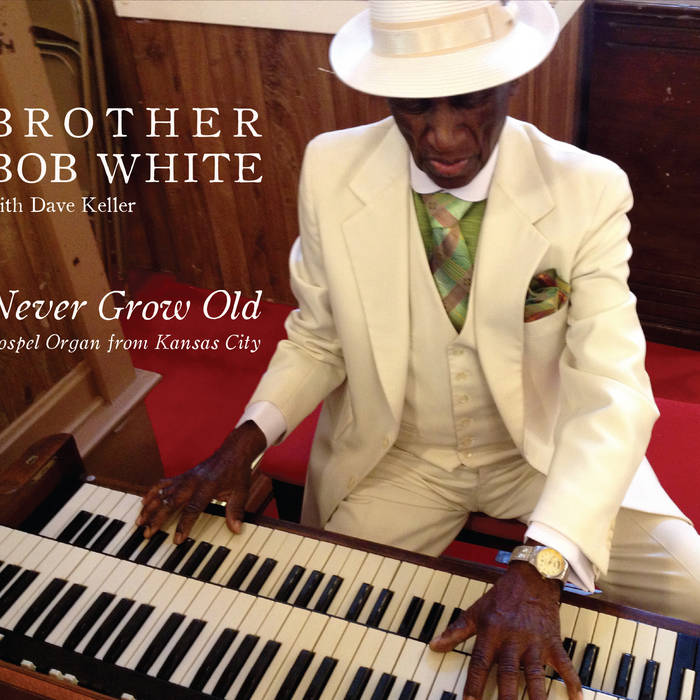 Brother Bob White is a living treasure. Eighty-two years young, he is one of the very last of the ‘old school’ gospel organists. For 56 years he has provided the musical foundation for churches throughout the greater Kansas City area. This is his first recording.

I met Bob by chance in 2001, while I was passing through Kansas City on a cross-country trip with my ex-wife. We had stopped at a natural foods store, and when I asked the cashier if there were any record stores nearby, a gentleman standing behind me in line asked what kind of records I liked. When I replied “blues, soul, gospel,” he said that he had a bunch of those back at his house, and invited us to visit him the following day. His name was Bob White.

That next day at Bob’s house we met his wife, ‘Mama Dorothy’, who treated us to a soul food Thanksgiving in the middle of July. And the records? They were wonderful, but not as wonderful as our after-meal jam session in their basement, with Bob at the upright piano, me with my guitar, my ex-wife with a snare drum, and Mama Dorothy and various grandkids and great-grandkids joining in with their voices. It was obvious that we had stumbled into an extraordinarily loving and talented family.

We stayed in touch as the years passed, ‘adopting’ each other across geographic and cultural divides. In the back of my head, I kept thinking, “Someone ought to record this guy.” Eventually I concluded, I guess that someone is me. I am honored and blessed to be able to help Bob share his beautiful music with the world.

For the past 56 years, every Sunday, the man known as “Brother Bob” could be found behind an organ at a church service somewhere in Kansas City. He has been the regular organist for more than a dozen congregations over the years, often bringing his skills to multiple churches on the same day. Presently, he can be found every Sunday at Mt. Calvary Baptist Church in Kansas City, Kansas. With most organists of his age either gone or no longer performing, he is probably the very last ‘old school’ gospel organist performing in the Kansas City area.

Asked to compare his style to that of modern gospel organists, he explains, “They’ve got these new fancy chords. I don’t play the fancy ones cause I don’t know them. But they don’t have the old ones. They don’t do it the old way. You don’t hear those songs anymore.”

In 2008, Mama Dorothy passed away. “I married Dorothy in 1960, May the 20th. We were together 53 years.” The past five years have been hard ones for Bob. In the studio, after singing “Never Grow Old”, Bob said to me, “Boy, that was rough.” At first I thought he meant that it was difficult for him to hit all the notes with his voice. Then he explained, with tears in his eyes, that it had been Dorothy’s favorite song.

We titled this recording Never Grow Old, to honor Mama Dorothy, and to honor Bob whose energy and attitude are those of a much younger man. Quite frankly, there is very little ‘old’ about Brother Bob White. Asked why he still performs gospel music, Bob answers simply, “It’s a part of me. I always loved it.” I hope that you will love the music contained on this recording, and that it will become as much a part of you as it has for me.